This year I attended two hackathons. The first one was the Money 20/20 hackathon and the second was the Coin-orado hackathon.

The Money20/20 Hackathon brings together hundreds of talented developers, designers and entrepreneurs to compete over 24 hours by building amazing FinTech applications using APIs, SDKs and other tools from todays biggest innovators in Payments and Financial ServicesA

A hackathon is a short 1-3 day event where people gather in groups and attempt to build a bare-minimum product idea. At the end of the event, the groups ‘pitch’ their idea to a panel of judges.

I met up with a few friends in Vegas for the event with no concrete plans in mind, only ideas. The only thing I knew that I wanted to do was something involving Bitcoin. In my opinion, Bitcoin is the single most interesting developing technology at the moment, and has huge potential in the world of financial services and contracts. So this was a given.

We spent the first 3-4 hours harvesting an idea to leverage bitcoin’s multi-signature wallet functionality to create an escrow service. Our escrow service was marketed as a friendly bookie which would escrow money when you make a bet with a friend. However, due to multi-signature bitcoin addresses, it was impossible for the bookie to steal your money! We call our service Bitcoin Bookie.

The process goes something like this, with many details being left out for the sake of explanation:

We managed to complete a working demo for this application using a combination of Ruby on Rails and client-side javascript.

After 24 hours of blood, sweat and caffeine, we managed to make it to the final pitching round. They called our name, and with no sleep we had to pitch our idea to a panel of renowned figures in the financial industry and hundreds of peers. It was a bit intimidating, but the rush of it all kept me from feeling anxious about presenting. We pitched our idea, and even pulled off a live-demo without a hitch. That was lucky.

After some deliberation, the judges awarded us a top 10 prize out of over 100 teams! What an honor. 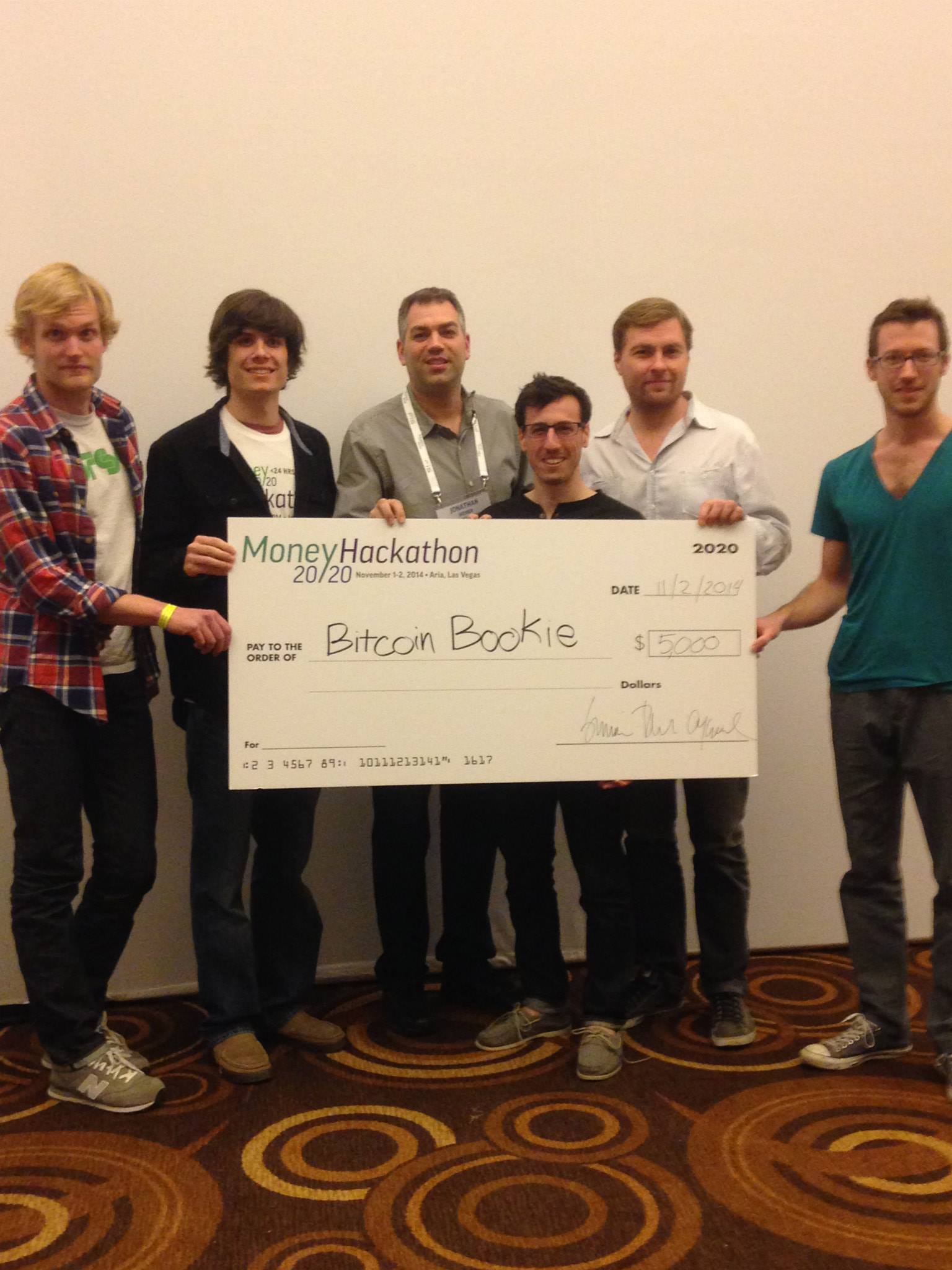 The interesting thing about hackathons is that they give you an excuse to put all real-world responsibilities on hold. This gives you the opportunity to give ideas the hyper-focus necessary to bring them from mere thoughts into fruition.

There are some inherent problems with hackathons I think. Firstly, they encourage you to ignore best practices due to time constraints. No one I have met is writing tests or heavily focusing on code architecture and readability in hackathons. It would be too unproductive. Hackathon culture can also be somewhat taxing physically. Staying up all night and drinking coffee causes a… unique style of hangover.

That being said, I think the good far outweighs the bad. For all the bad design decisions you make along the way, you spend invaluable time collaborating and hashing out useful product ideas.

I learned it is important to always remember that the goal of a hackathon is not to walk away with a production ready product, but to be able to effectively communicate and present your idea to a panel. Having a working demo can be very useful for this, but it’s not the most important part.

I would like to make a special shoutout to Chain.com for their help throughout both hackathons. They make developing bitcoin applications exponentially simpler and effective. They flew out employees to both hackathons who got down and dirty helping people use their API. On top of that, they have incredible documentation for their API, which is the most important aspect of an API.

Writing is funny; you slowly discover how little you know of what can be known. And of all that you do know, it never sounds quite right when jumping off the tongue. What is clear in one’s head is never easy to relay to a piece of paper. Regardless, here’s my attempt.

Ever wanted to easily preview what you markdown would look like exactly on Github? Ever wanted to do that from inside of a Terminal? Well this Gem is for you. Dead simple. Never get caught writing ugly markdown again.